Well, before you know it November will arrive, so I decided to link up with Kathi and see if I can get some things done.  In November I hope to:
That should be doable.  As for October as you can see most of my list was completed. 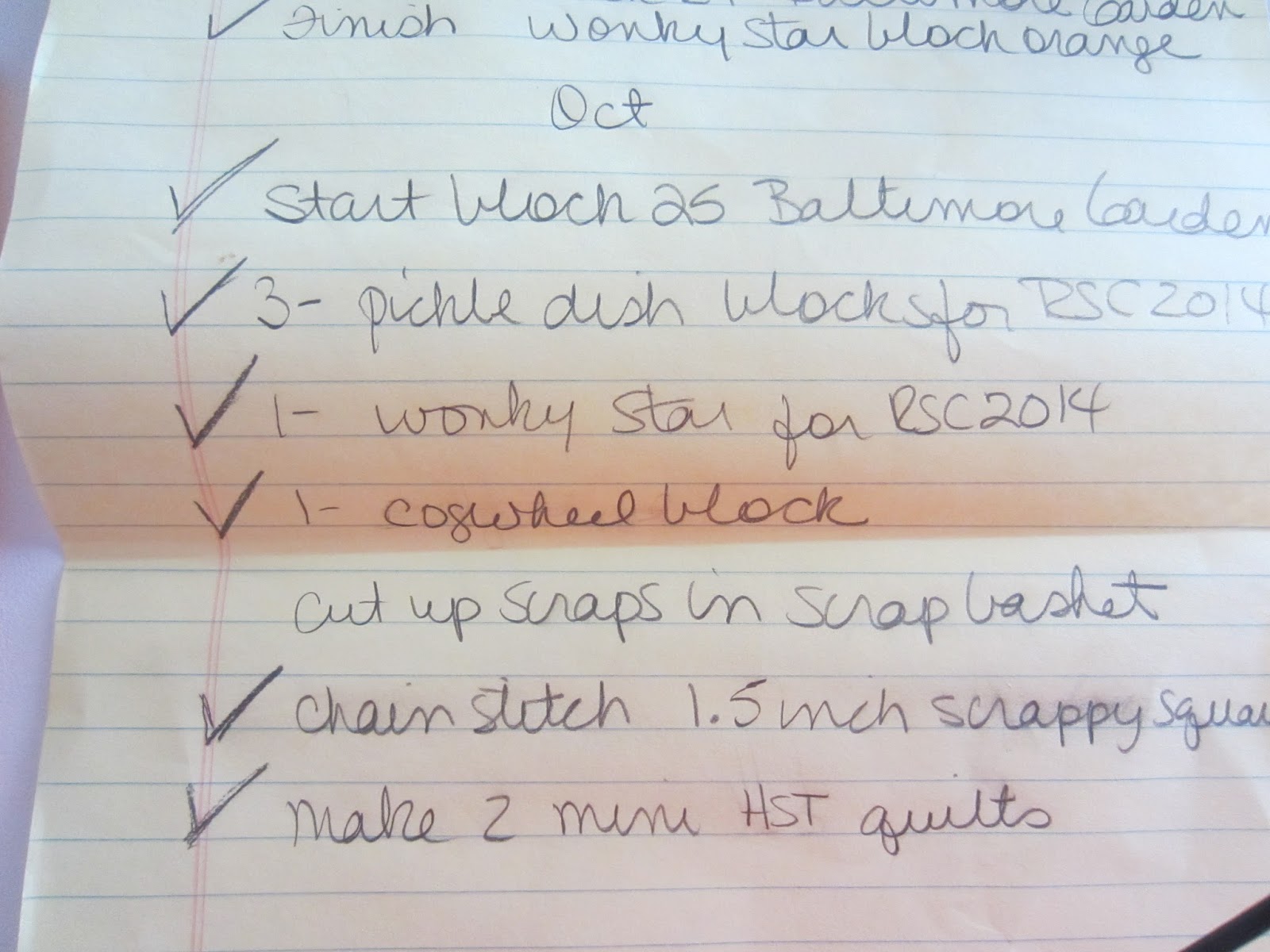 I had a few more things I accomplished as I made a mini churn dash top and I started my borders for Baltimore Garden.  But, I easily put off cutting up the small scraps in my little basket.  Maybe I can still get it done if I put it on my Monday morning list. 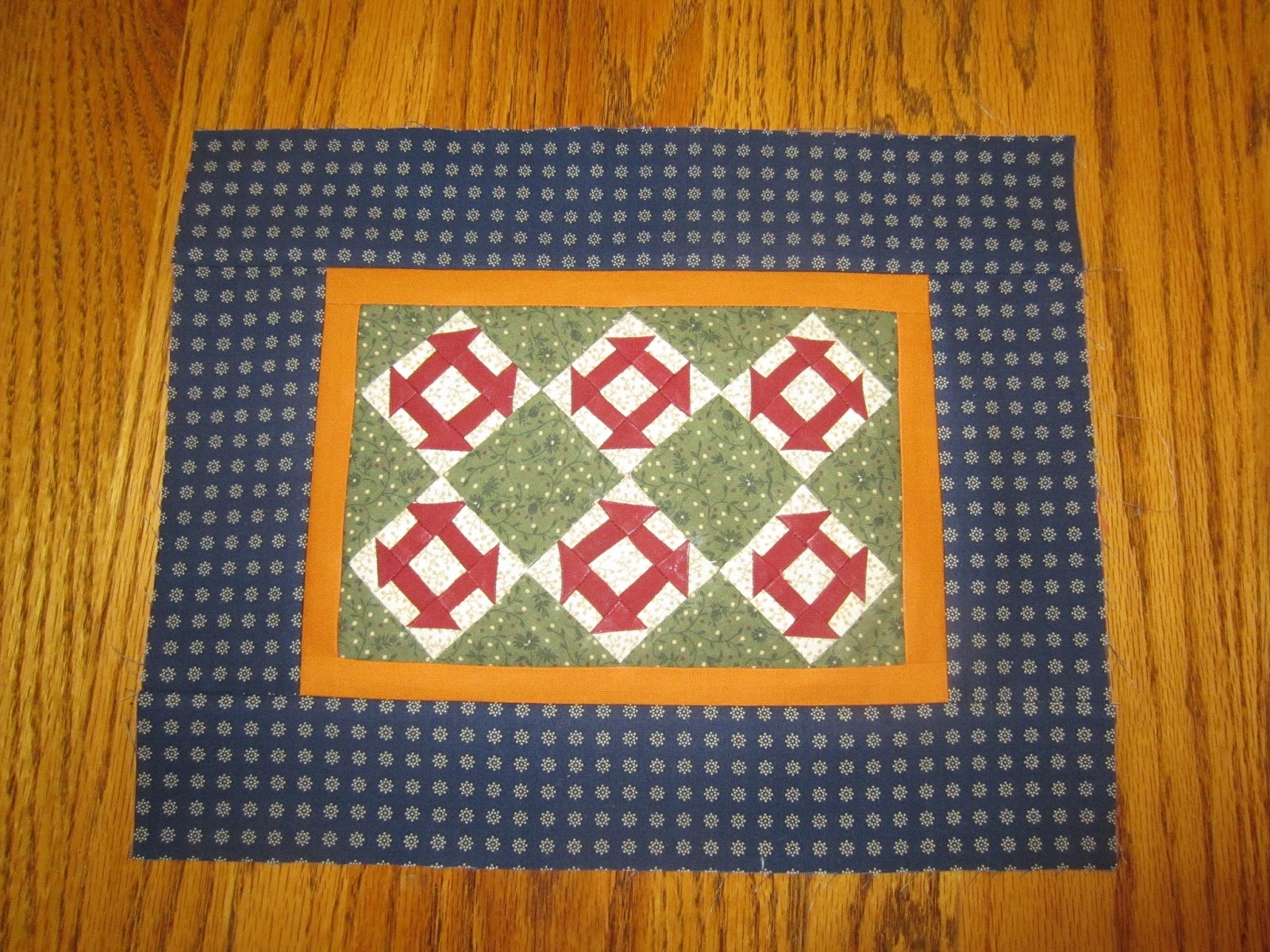 Posted by Carla A Few Of My Favorite Things 21 comments:

The slow stitching continues as I started the working on the borders of Baltimore Garden.  It brings some excitement to the project as I have never done an appliqued swag border before.  I am following the wonderful instructions that are in the book. I was successful at using the fast stitches of my Viking to back baste all of the swags to the four borders.


We are having a bit of a warm up today so I decided to sit out back and put in a few more of the many stitches need to secure the swags.  I will be joining Kathy and the others who participate in Slow Stitching Sundays to see how things are progressing.


Posted by Carla A Few Of My Favorite Things 18 comments:

I know, I know, is she still working on that quilt!  Yes, honestly I am!  Alright I am working on several other projects too, but I did give this block my full attention this week, anyway for most of the week.

So I started out by making the templates for the flowers as the leaves and stems were completed last weekend.  I found making a photo copy of the pattern on freezer paper works best as I get a more accurate template.  This flower had five layers of petals so I made five copies so that I would get five templates. 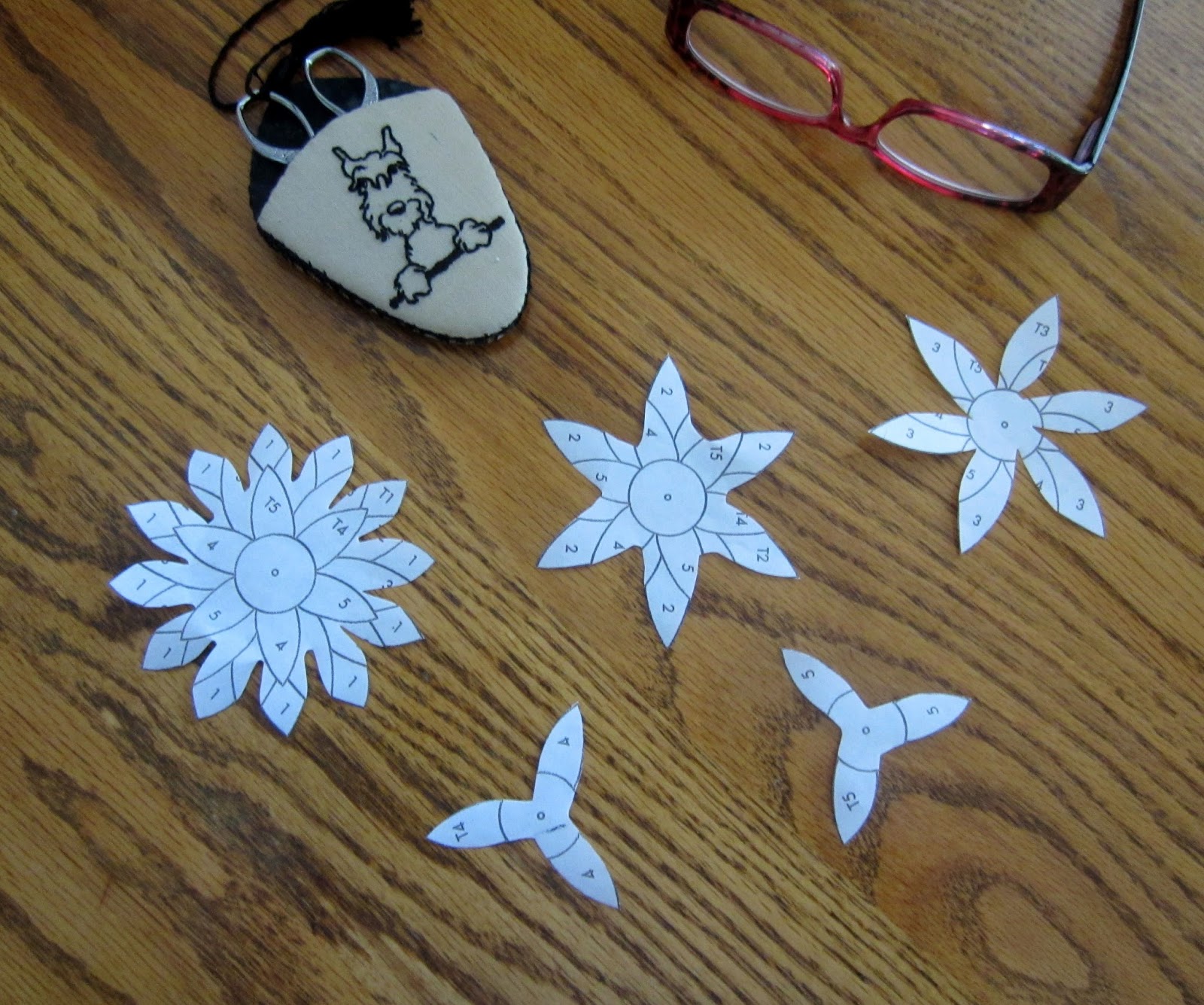 The freezer paper template was pressed on to the fabric. A white mechanical pencil was used to trace around it and it was carefully cut out leaving the 3/16 inch seam allowance.
Then the stitching began.  Only four flowers it can't take that long can it? The petals seem so large compared to the last block so they are really fun to stitch. Here are some photos of how things have progressed:

So many many slow stitched applique stitches later I had all five layers added and by then there was no stopping me.  Too close to finished to put it down. So I made the centers and ta da a finished block!  I danced all the way to the pressing station, after all this in number 25 the final block of this quilt top.   Yes, I get to move on to the borders!
I hope you find some time to relax and put in some slow stitches and get closer to your own glorious finish!  I will be linking up with Kathy and the other slow stitchers to see how everyone is coming along.  ﻿
Posted by Carla A Few Of My Favorite Things 52 comments:

A Sewing Box full of Memories!

Recently, I was given my mom's old sewing box.  It is is a wooden accordion type sewing box.   It has edelweiss and other flowers painted and carved into the top and sides.  I remember as a small child that I was fascinated by it!  When my mom would open it up to get something she needed I was always taking a peek and amazed at how it would open to allow it's owner to see it all of it contents. 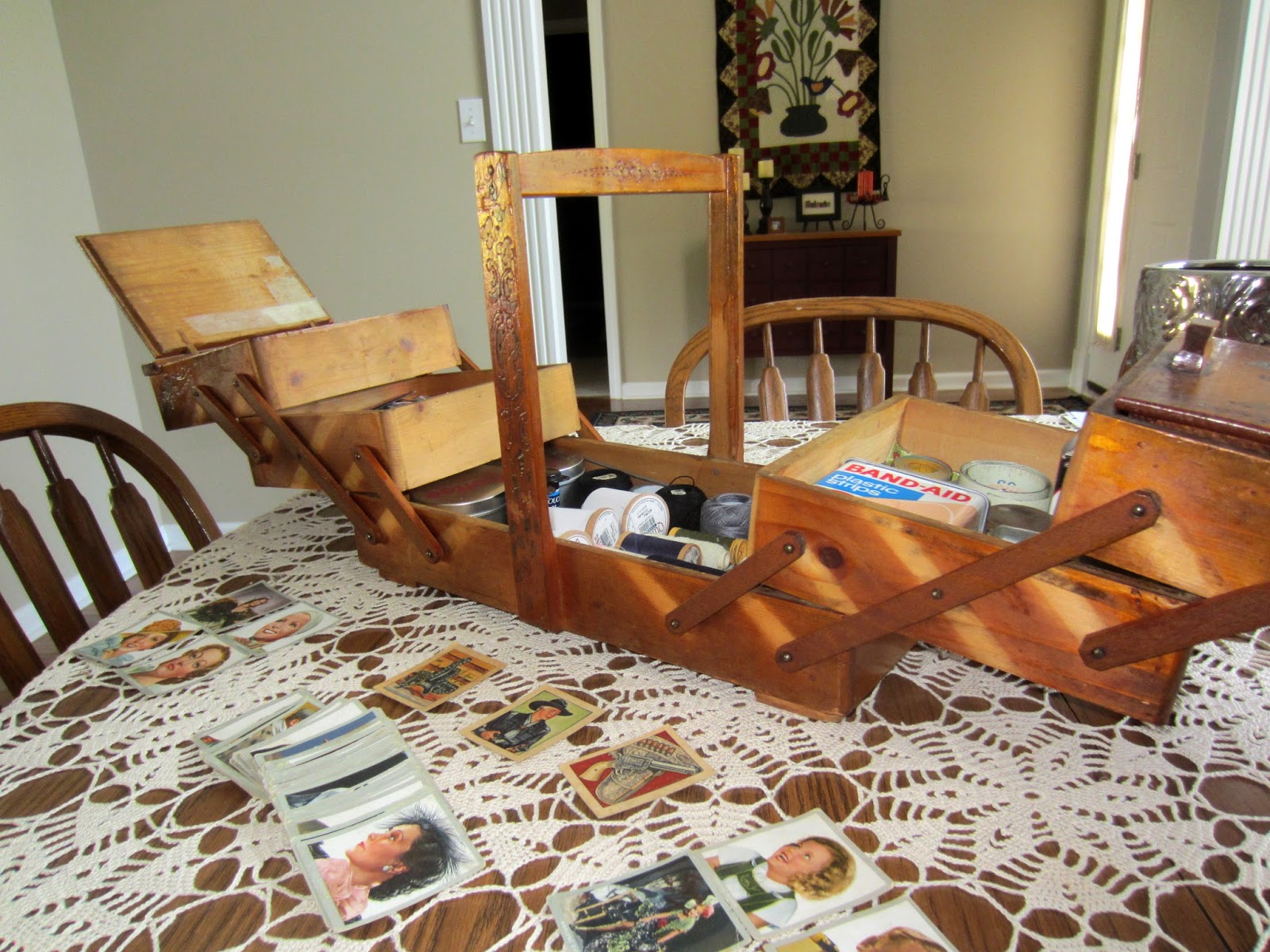 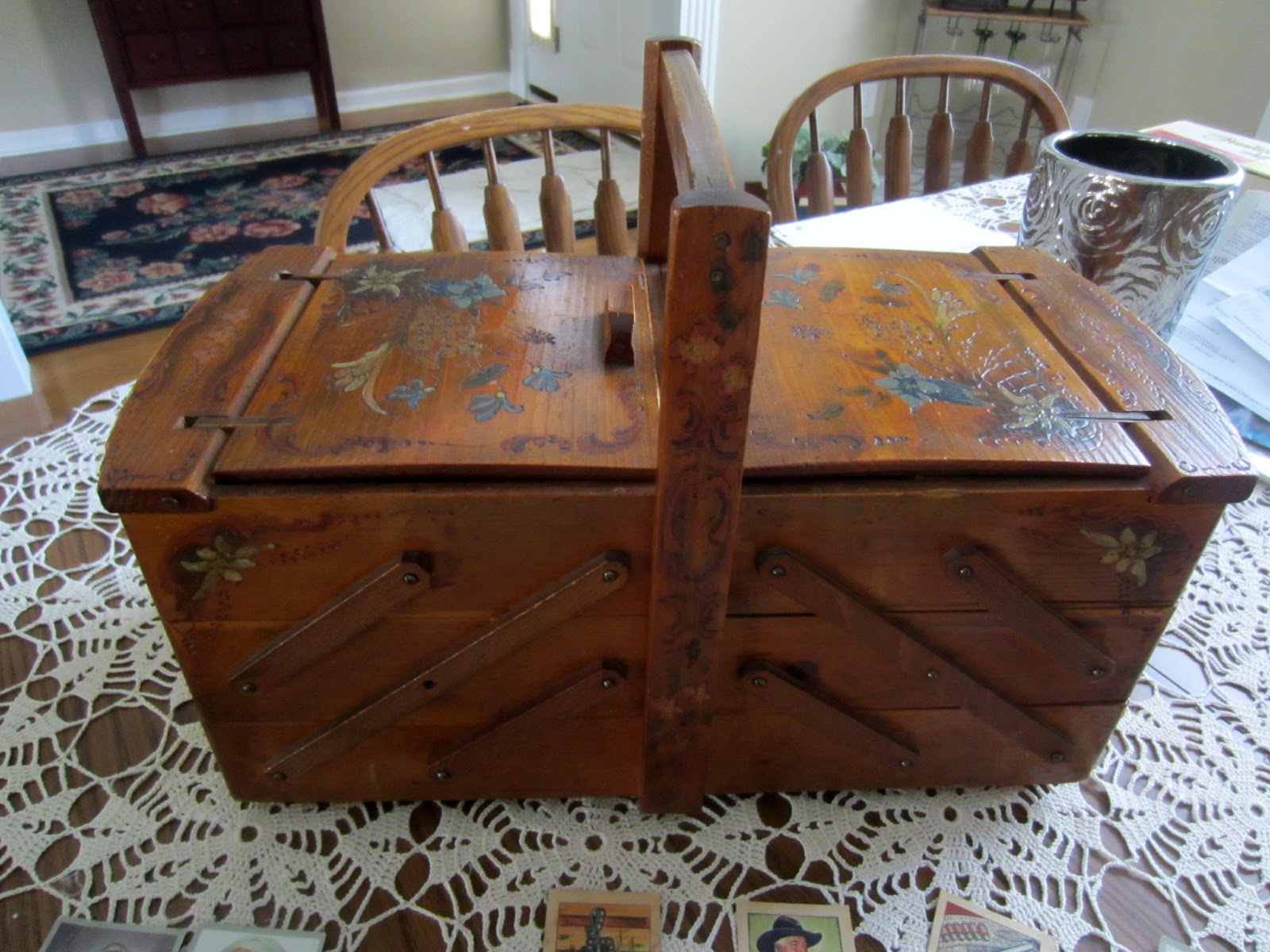 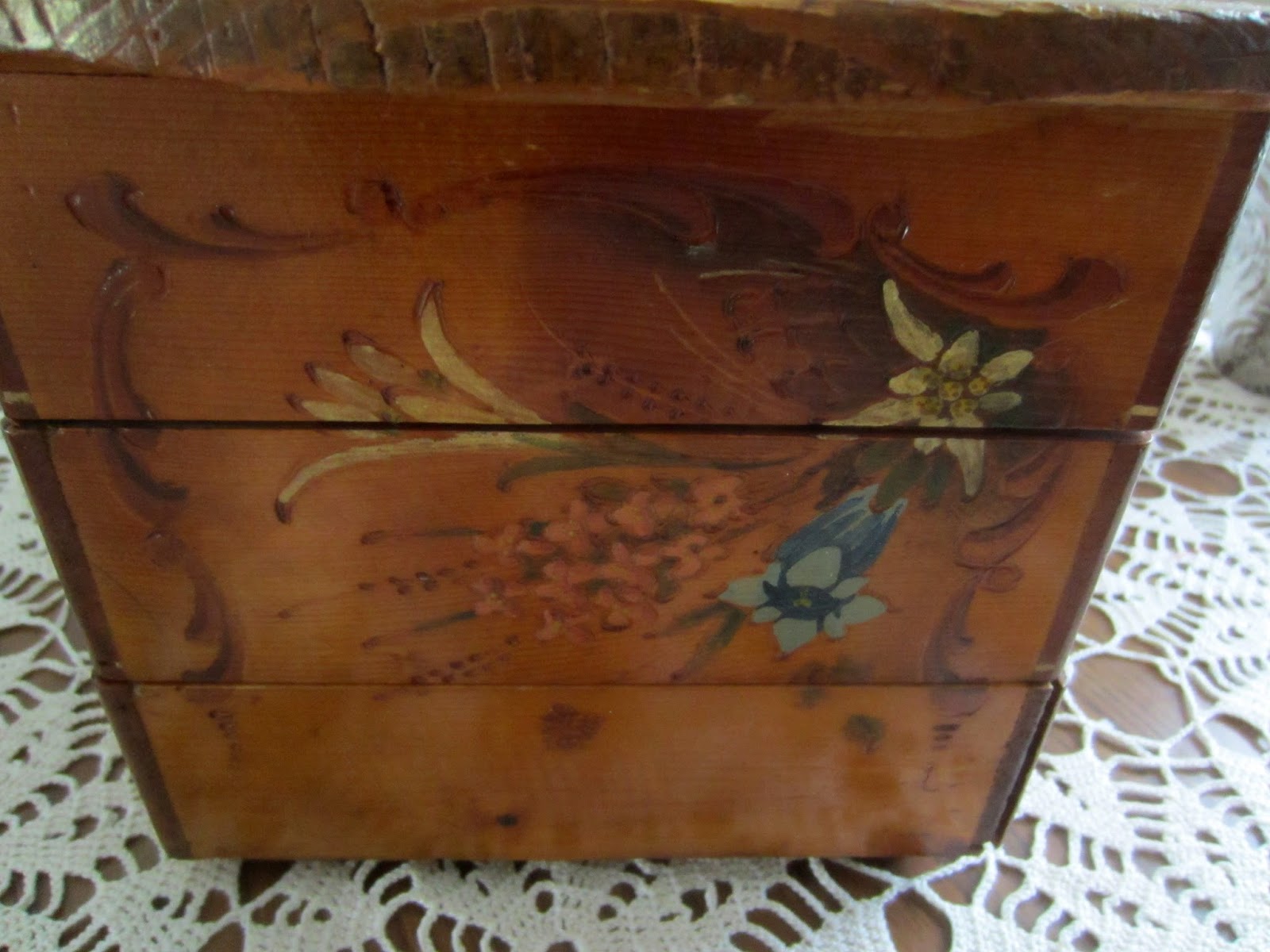 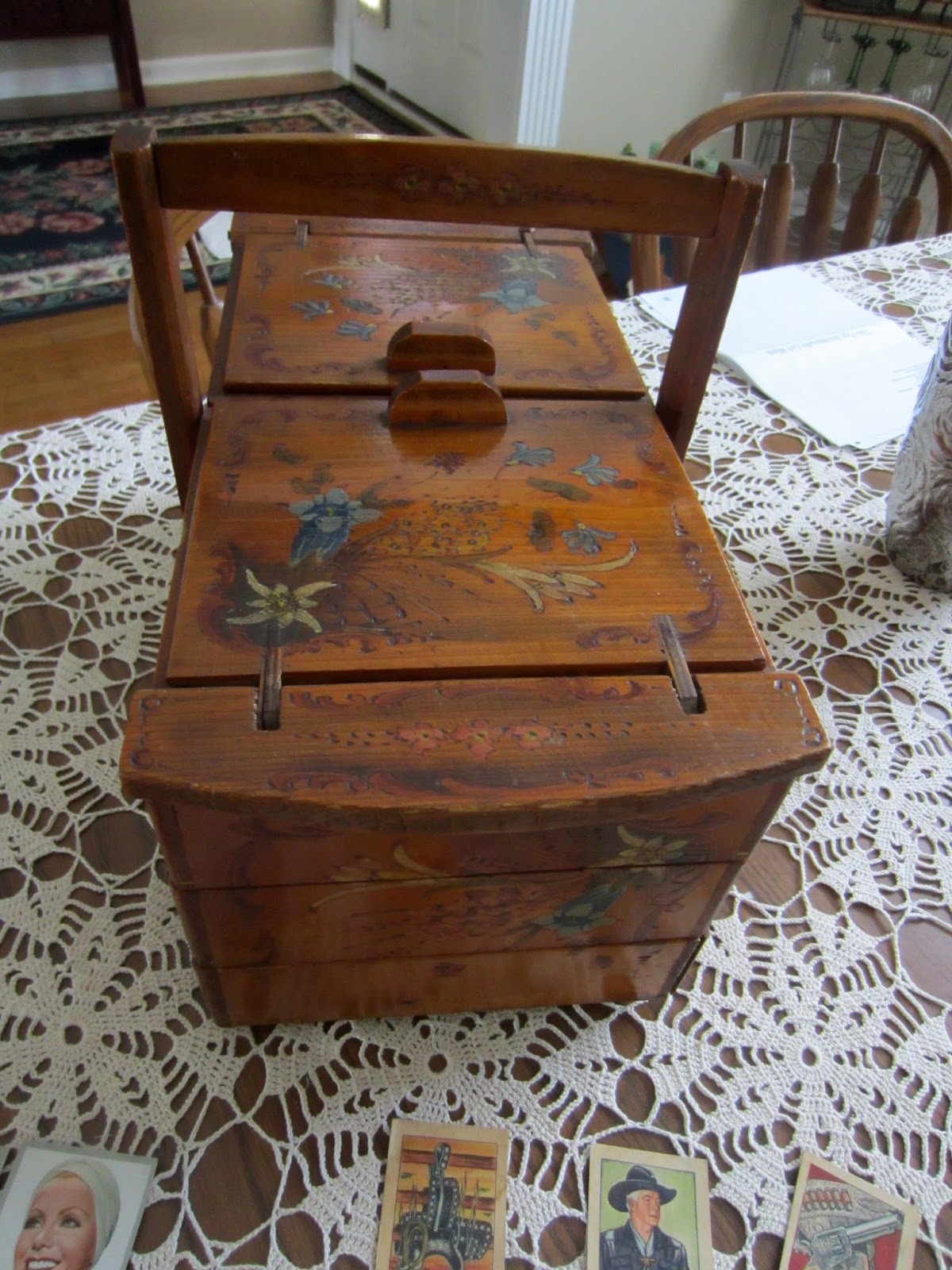 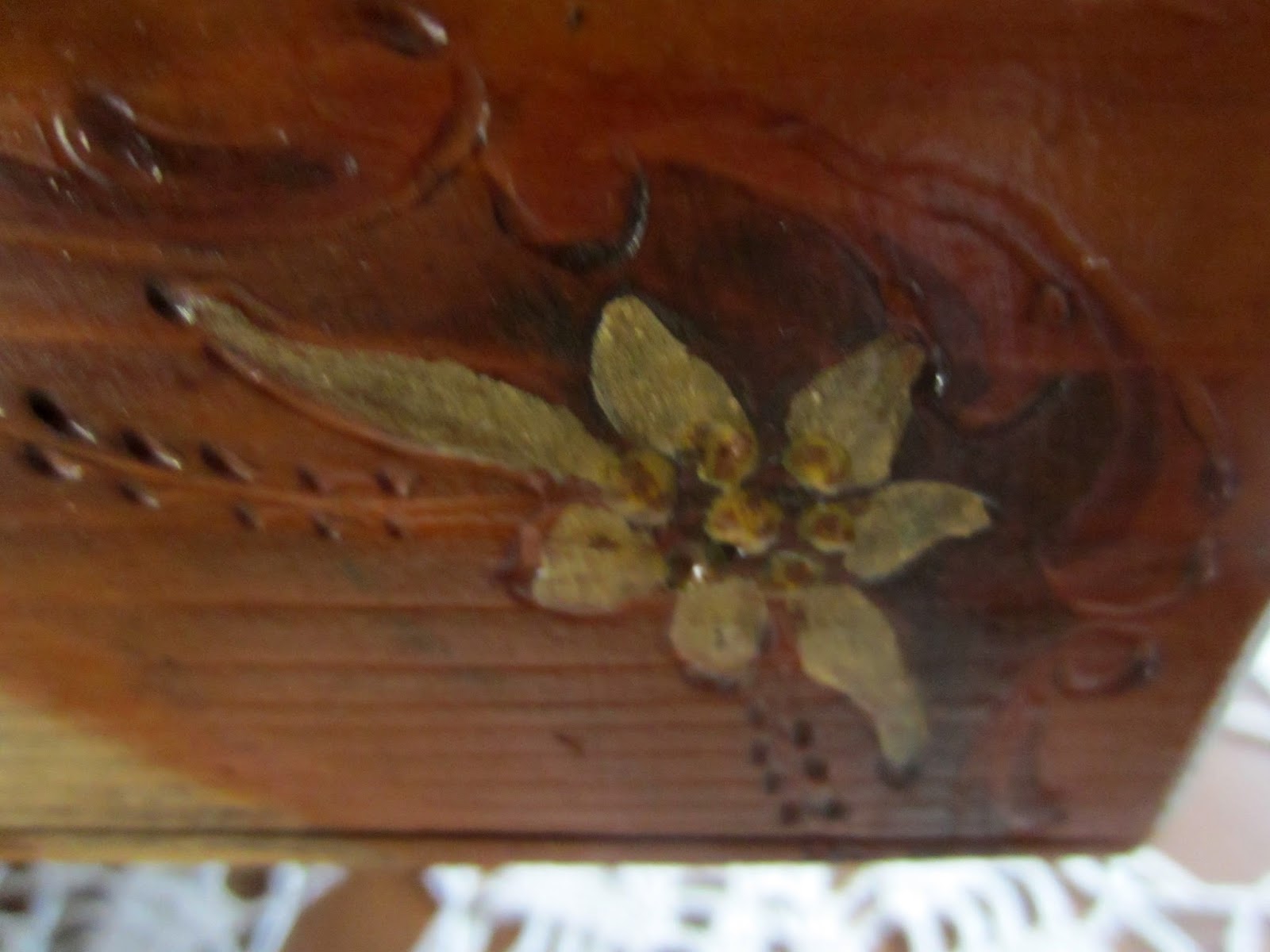 It still  contained  some items that probably have been there for some time.  It was almost like going thru a time capsule.  I found one of those metal yard stick rulers that rolls up!  I think they were from from the 50's and 60s. 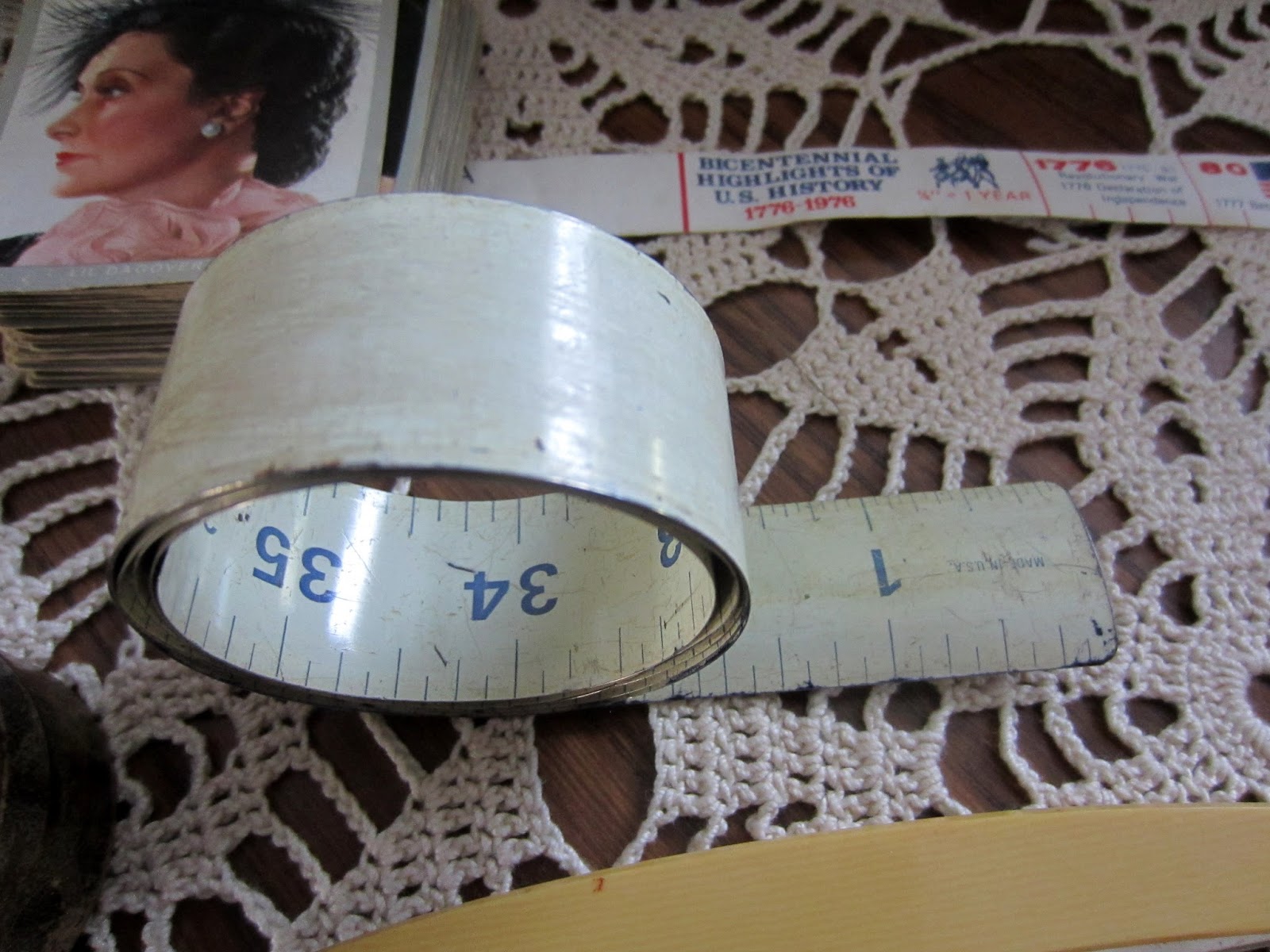 I found a tape measure in metric measurements that was made in Switzerland. My parents immigrated from Austria in 1952 and this sewing box was one of few treasures that she brought with her.
﻿
﻿ 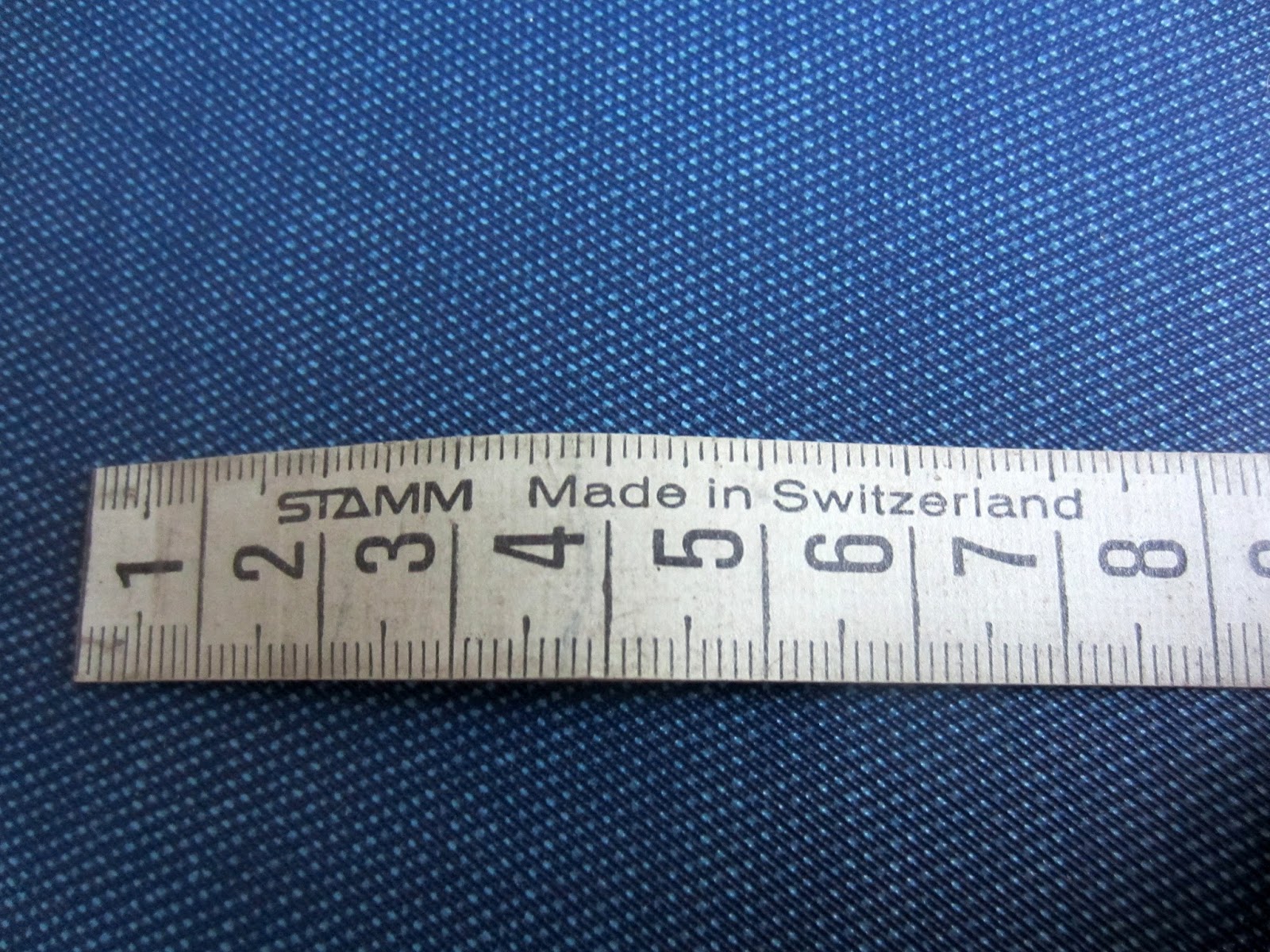 There was a straight razor made by E Weck and Son NY made in the USA. Having gone thru WW2 in Europe, I remember my mom using this to take apart clothing to repurpose the fabric.  She told us stories of how hard life became during WW2 and that they became very resourceful repurposing things just to have something to wear. 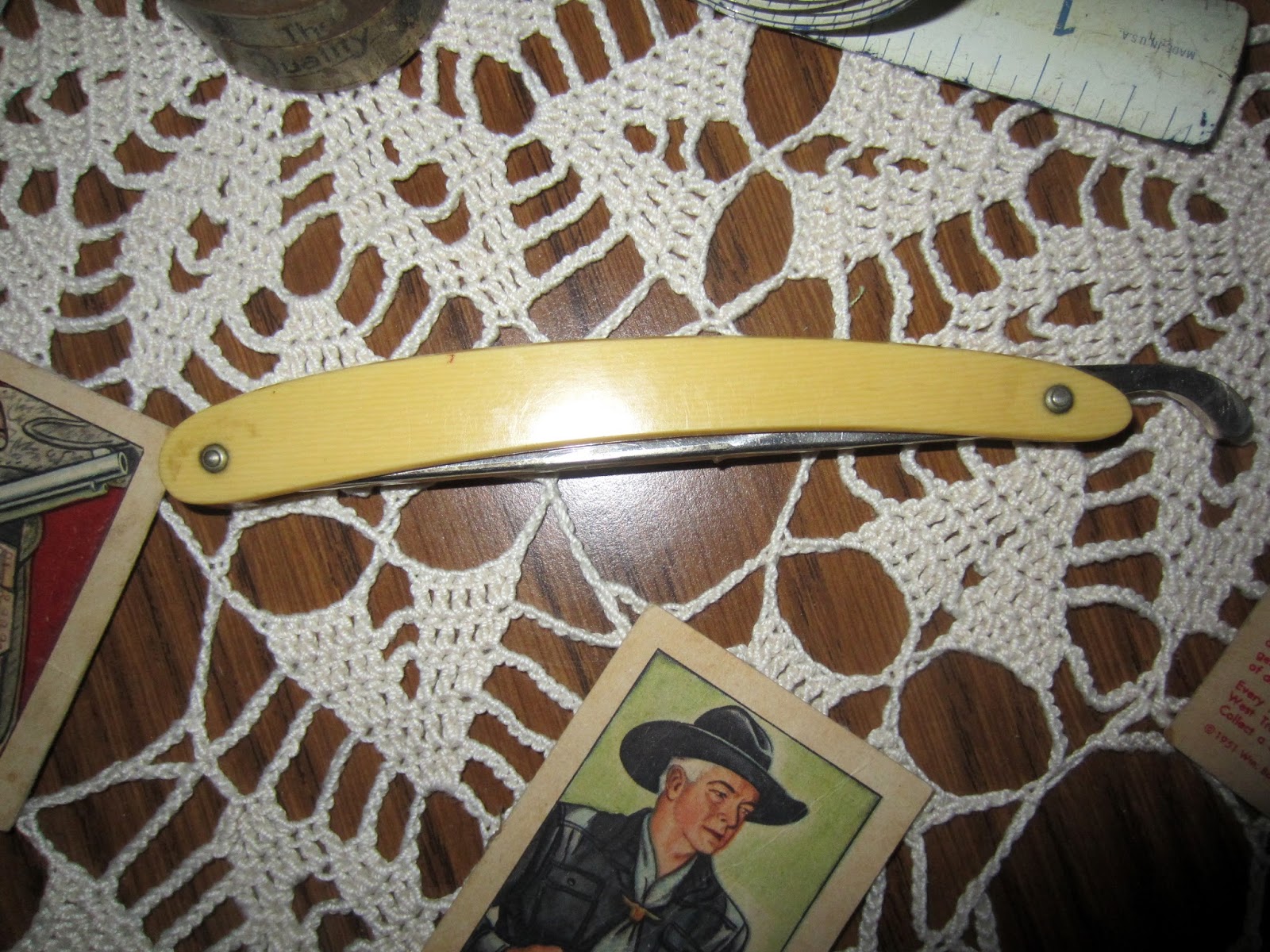 A metal bandaid box filled with buttons. You don't see those anymore.  I bet everyone can remember someone in your family using them to hold their treasures. 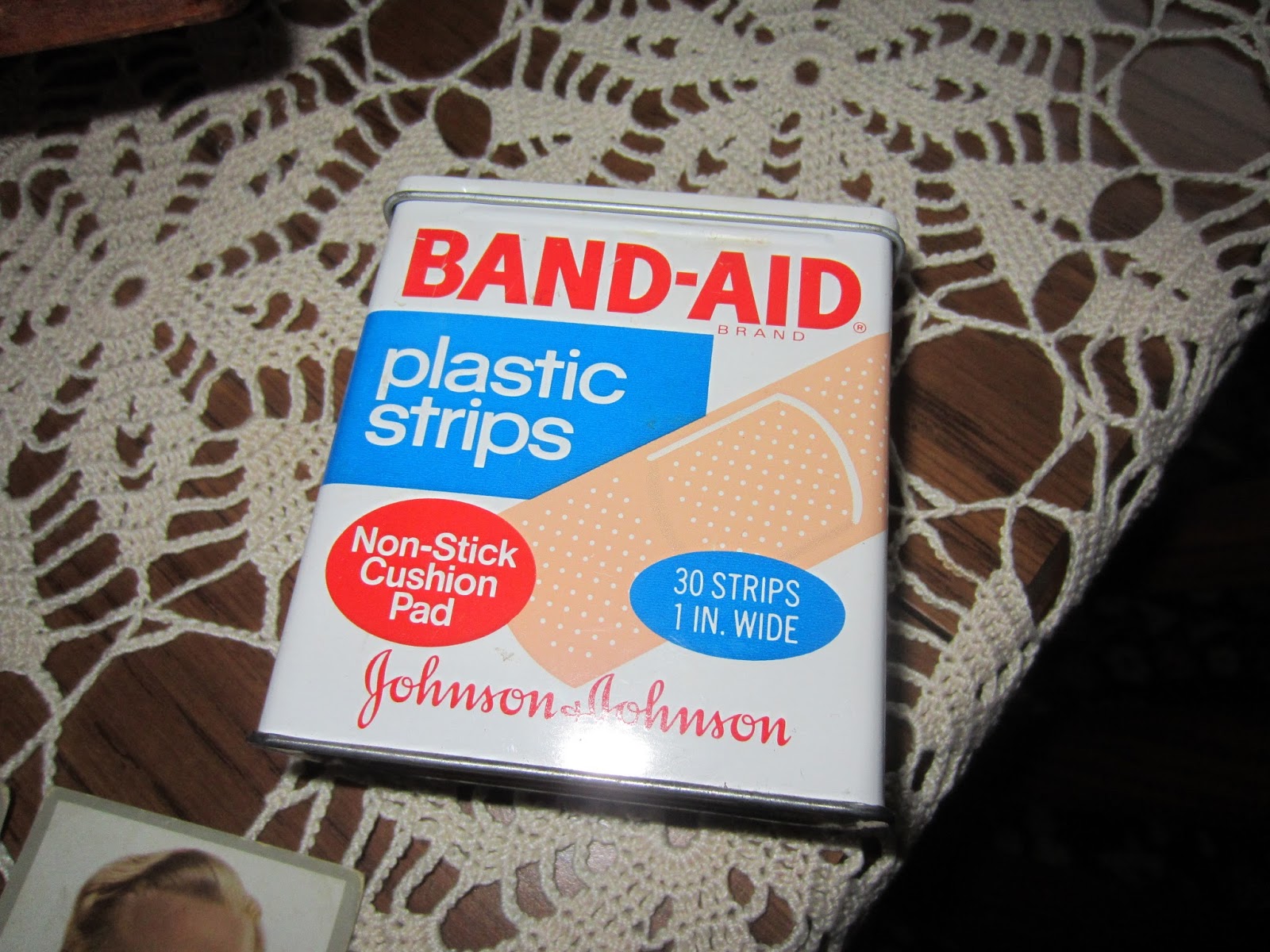 At the very bottom there was what I thought was a deck of cards.  A closer look told me I was wrong.  It was a deck of famous actors.  Most of them have german names and the writing on the back is in german.  So my guess these were cards people would collect.  A few were recognizable names:  Greta Garbo, Claudette Colbert and  Joan Crawford,  What fun!  There were also three Hopalong Cassidy Wild West trading cards that came from Post cereal boxes and are dated 1951. 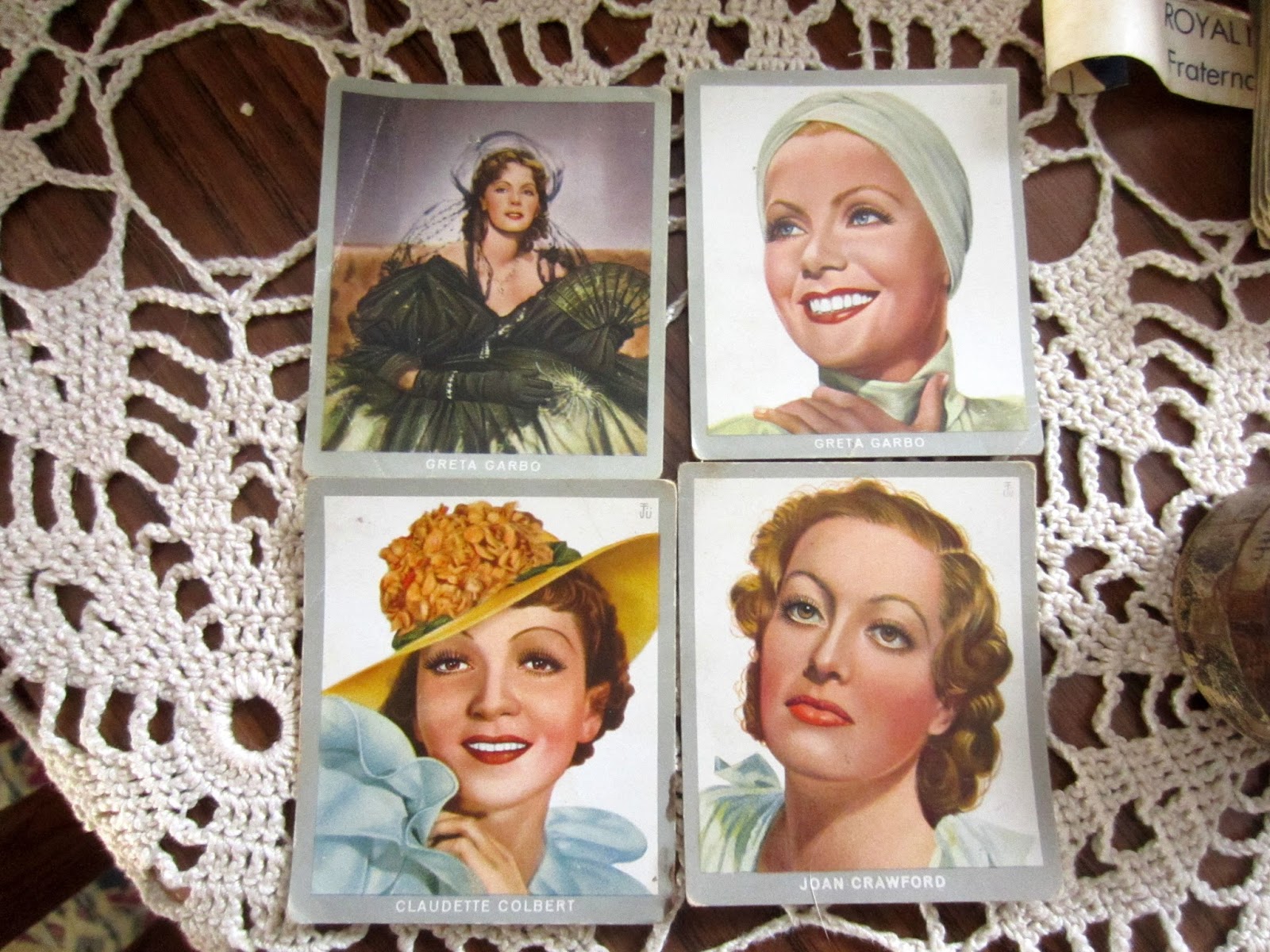 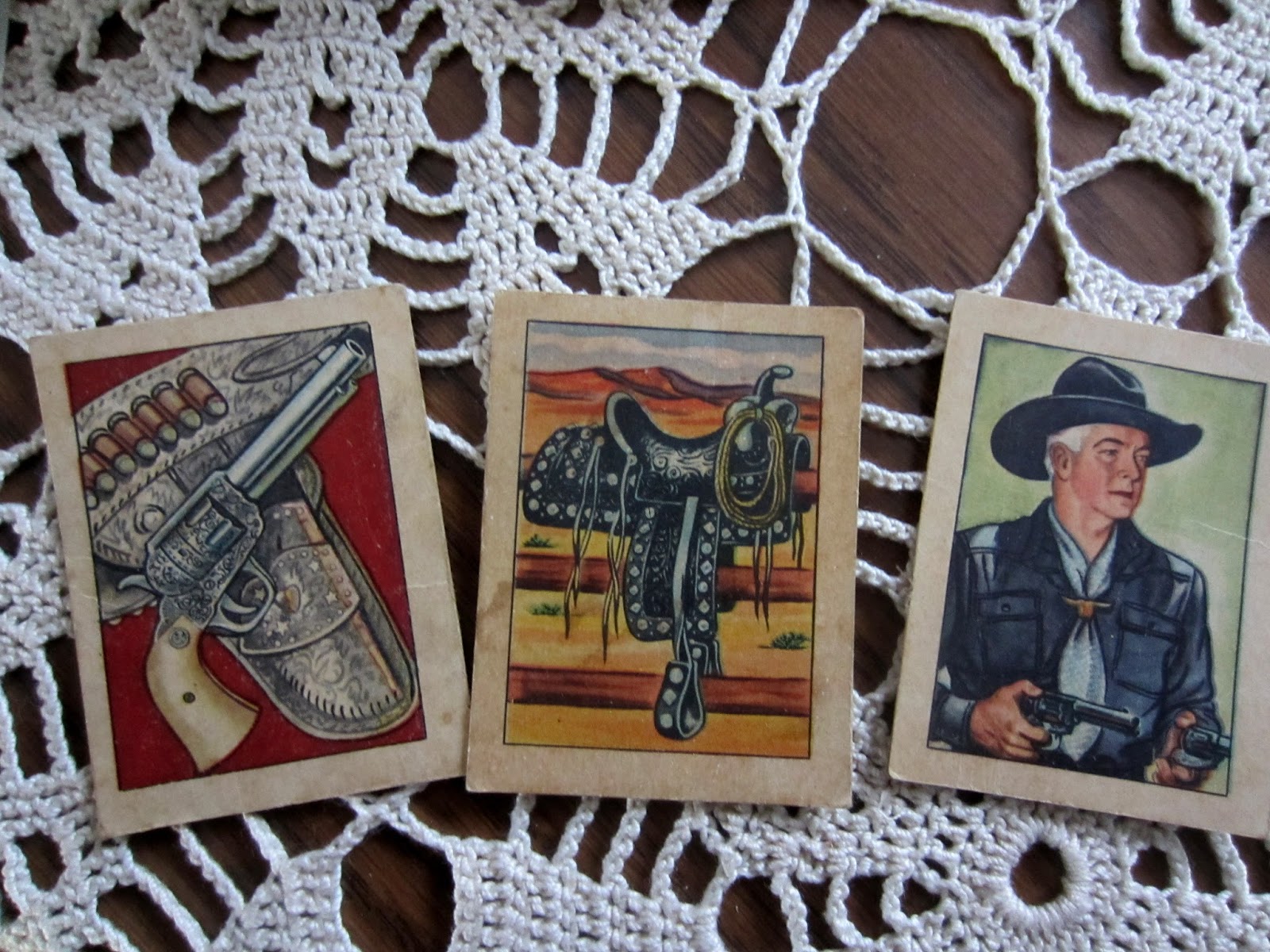 All of these items I think will stay in the sewing box,  it just seems fitting to me. But I will also be using it to store my sewing notions.  As I reread this post, I realize that none of these things are of much value, but they are to me.  They are a reminder of an earlier day, much like a family quilt that contains fabrics from our ancestors clothing.  I am not sure how you put a value on something like that, I really don't think you can.  I am just thankful that I can enjoy using it everyday and relish in the memories that it brings back for me.

Posted by Carla A Few Of My Favorite Things 14 comments: 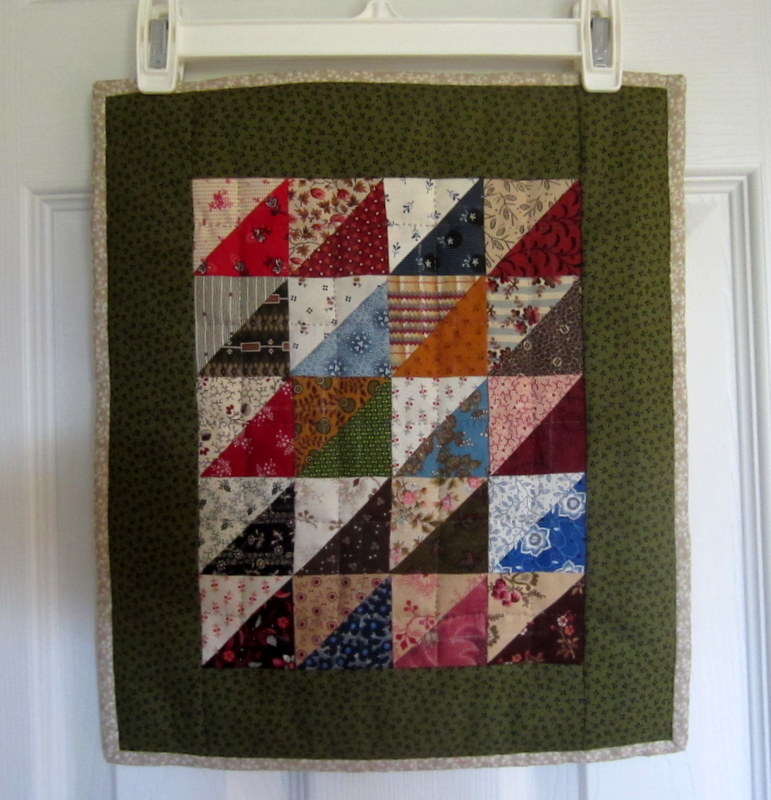 The two mini's are complete and this one will be heading to Rita's house.  The design is simple but really lets the fabric shine, don't you think?
Posted by Carla A Few Of My Favorite Things 8 comments:

Today, I will be joining Kathy and the other bloggers that will link up and share their slow stitching projects.  I got a good  start on my last block for Baltimore Garden last week.   A few more leaves to applique  then I will get to some of those softly curved stems.  I love putting in those applique stitches each one getting me closer to finishing this block.  I am getting a bit excited about starting the borders.  I have never done a swag border and I just love doing something new and different. 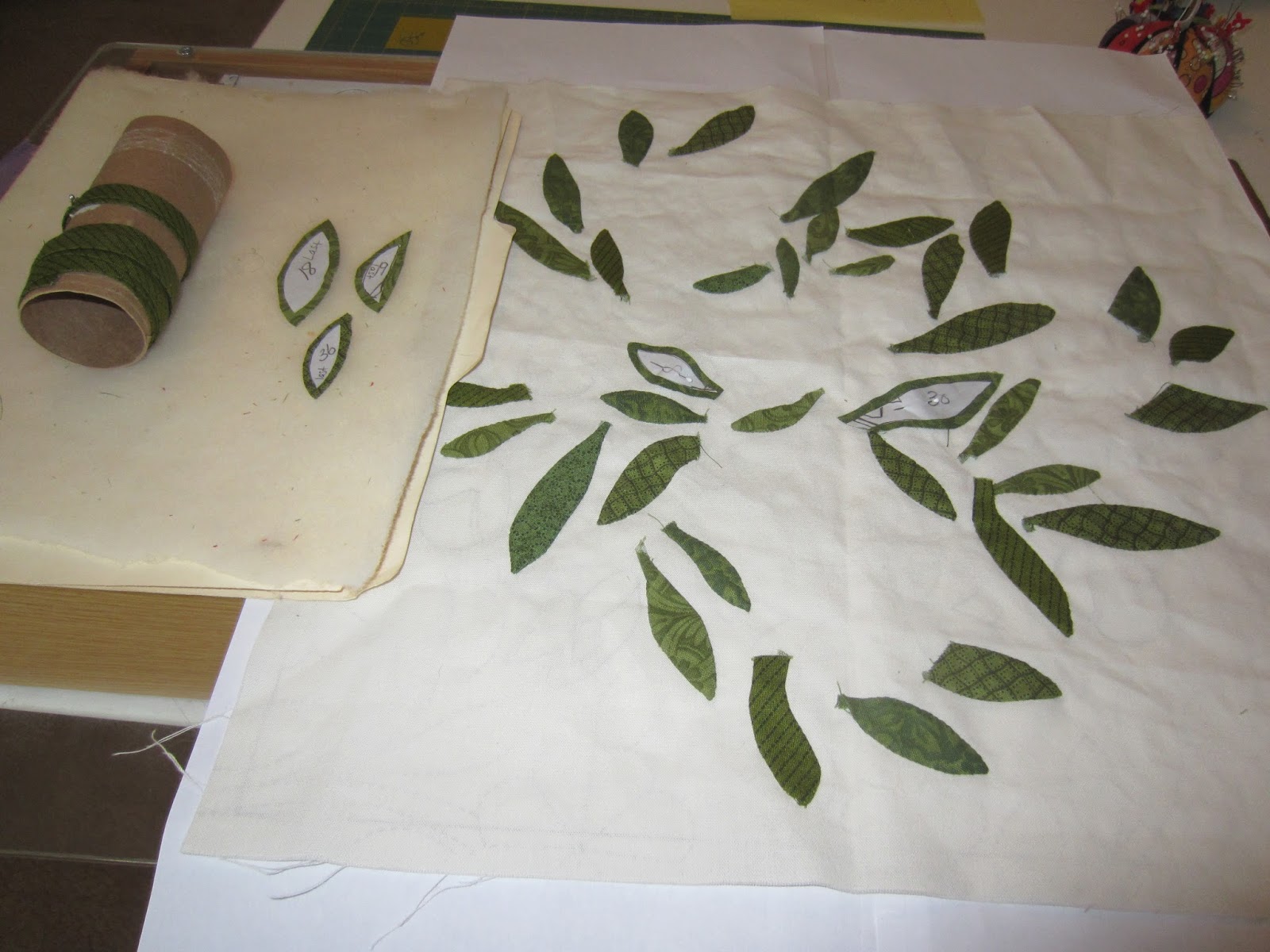 It is good to get back into the old routine after being out of town!  But,  it was fun to get away for a few days.  My husband is such a sweetheart and one day he suggested we find a quilt shop so that I could do a little shopping.  I discovered the Rabbit's Lair in Rogers, Arkansas.  It is located in a part of town that has been refurbished but still has that old time charm.  They had large cabinets on each wall with drawers pulled out filled with fat quarters.  So I just couldn't resist getting a few! 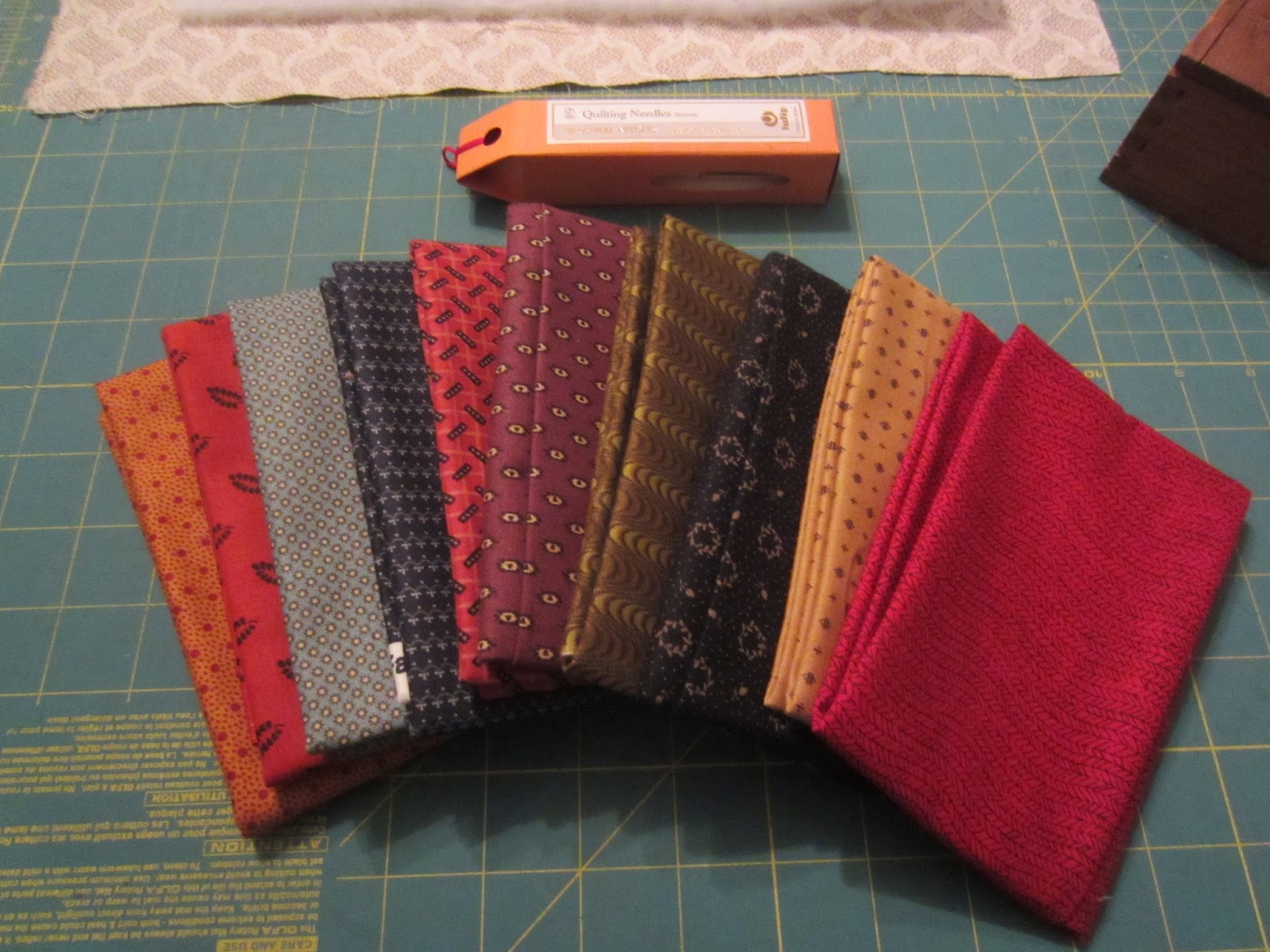 A few weeks ago I won some beautiful squares of fabrics from Kathy over at Inspired by Antique Quilts. The deal was to make two mini's and share one with a  friend.   I hope to spend a little time today finishing up the hand quilting on these.   One of these will go on my mini wall and one will go to my friend Rita.  We both chose this green border so the two little quilts are identical.  I had a lot of fun making both of them! Hope you can find some time today to reflect on your week and enjoy some slow stitches! 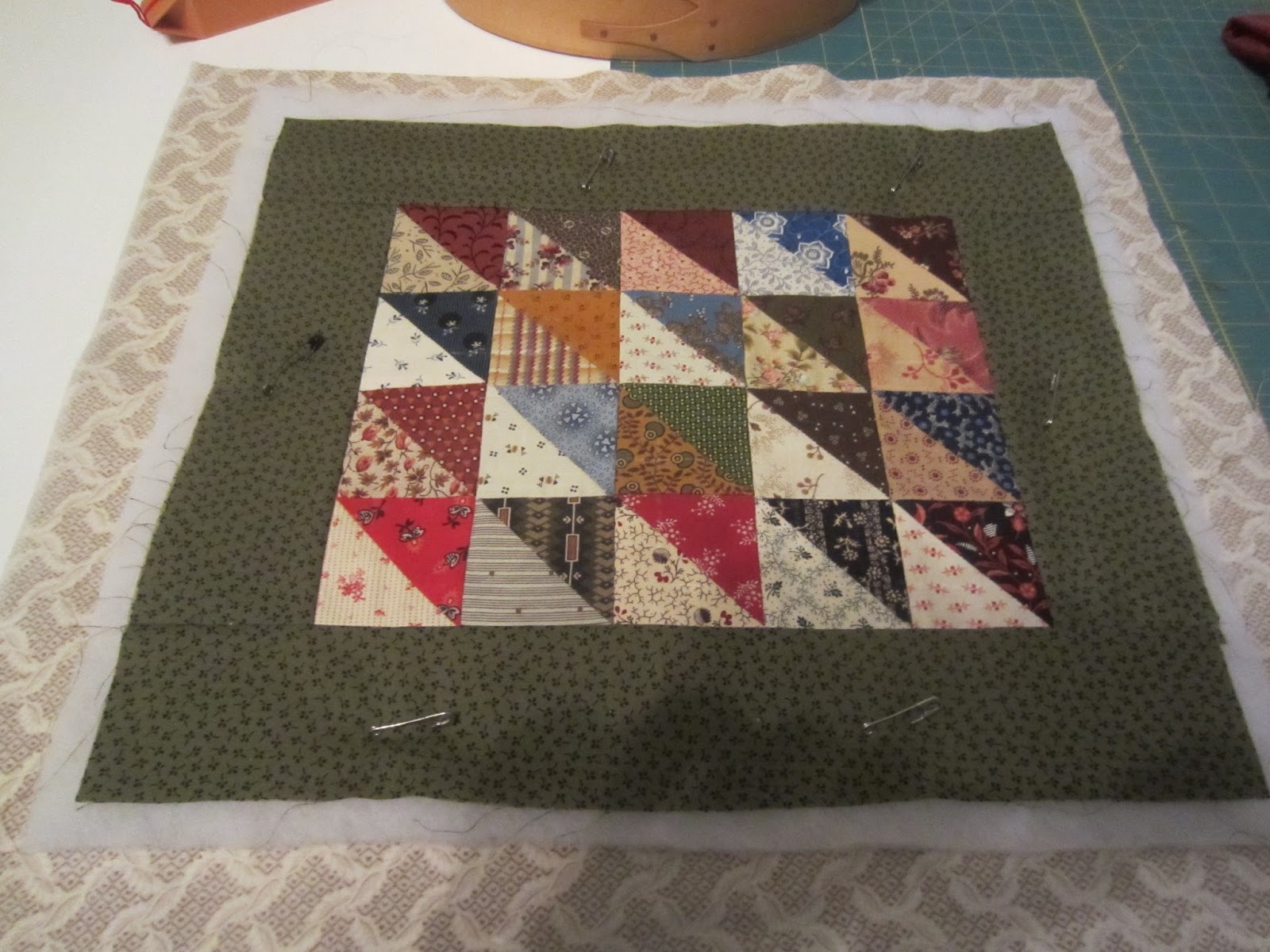 Posted by Carla A Few Of My Favorite Things 34 comments:

Well, I am off to a bit of a slow start this month!  Angela has chosen brown as our color of choice.  At first, I thought "Oh my! Brown will never work in my RSC quilts."  I read thru Angela's post and she suggested we make the blocks and then decide.   So I went to the sewing closet to see what I could find.
I knew I had some browns to use, but they are not the bright fun fabrics that have made up my other blocks.  Then I pulled out the gray and black whites that I have used in all of the other blocks.  " There is no way this is going to work!"  But I decided at the beginning of the year I would stick to using fabrics from my scrap box or at least my stash.  So I printed off my paper patterns and off I went to work making up the pieces that I would use to make the three pickle dish blocks that I need for this months challenge. Once I sewed them together, they started to grow on me. The real test will be how they will play with the others.
I also pulled out a lot of other browns to make the four inch squares for my wonky star block.  I decided in my head if I used a lot of different browns maybe it would be able to fit in with the other bright fun blocks I had already made in the past months. This was the result!
I took a minute to lay out all my wonky stars to see if the brown block would work!  I must say I am a bit surprised that it looks pretty comfortable.  Not sure what the final layout will be yet. 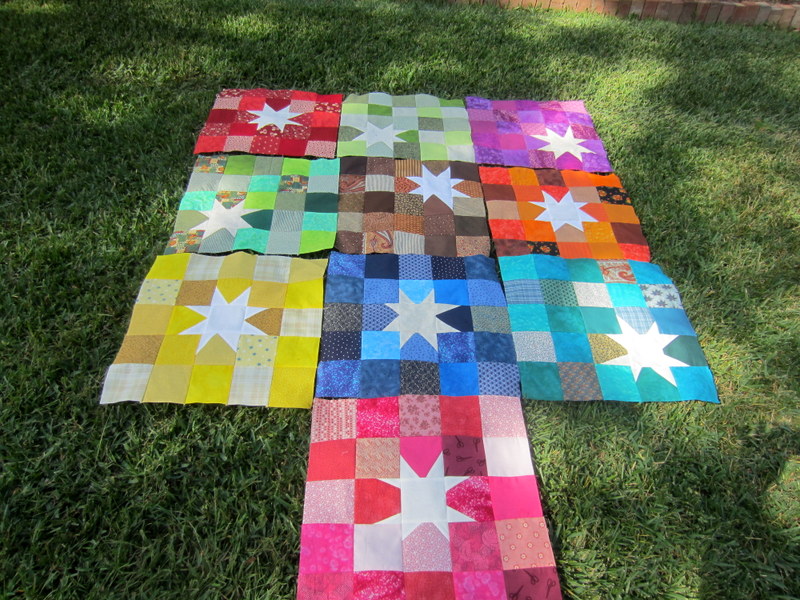 
I also put together a few nine patches this week.   I wanted to try  Barb's tutorial for the little nine patches that she and a group of bloggers are swapping!  They are fun to make and I plan on adding to my collection.  Hopefully, someday they will become quilt!
﻿﻿﻿﻿﻿﻿ 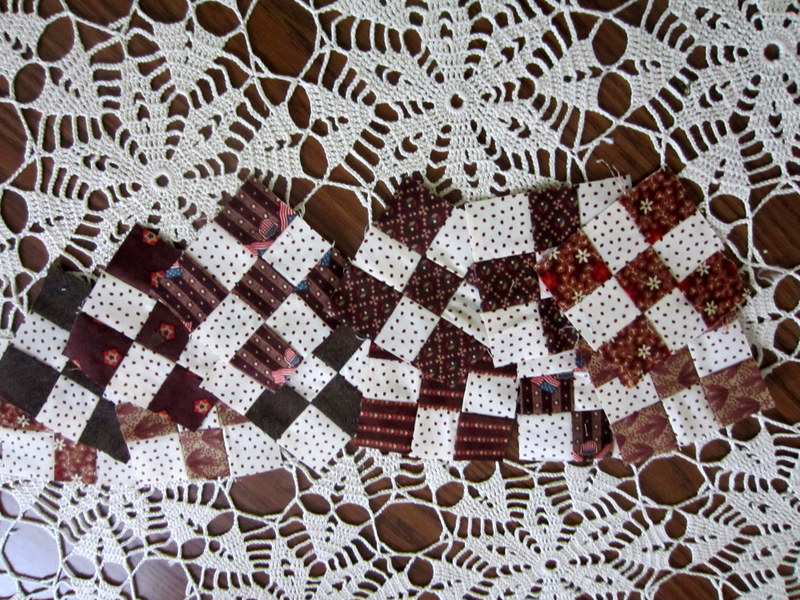 I am linking up with Angela and the rest of the RSC participants to see what others are doing with their brown, black and gray scraps.
Posted by Carla A Few Of My Favorite Things 32 comments: