Kathy over at Kathy's Quilts reminds us today to add some slow stitches and to slow down take some deep breaths and relax.  I haven't been able to do that much lately.  I have been dealing with losing a pet that was very dear and he had been with me thru my quilting journey.  Not having him there at my feet under the hoop has been hard. But, I know I must move forward.  So instead of feeling sad, I am spending my time stitching remembering some of the great times and travels we had and the new friends we made. 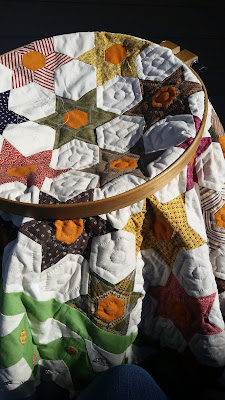 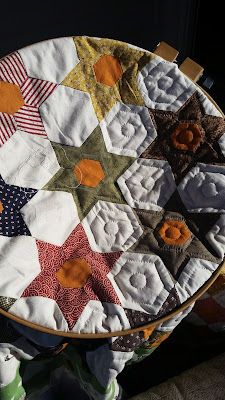 I am really liking the way this quilting design works well for working in a hoop.  I have done quite a few quilts with a crosshatch background which means several needles at once. This design is completed without moving the hoop and the parts of it are close enough together that I can move my needle thru the quilt to the next part.  Just what I need some relaxing stitching !!!!!!
Posted by Carla A Few Of My Favorite Things 15 comments:

I think I can finally sit down and write a post about my buddy Max.  When my kids left home he came to us thru a friend of mine.  Mr Max was just a year old and full of energy.  He was given to us by his former owner who loved him but just didn't have the time to give him.  He just wanted Max to find a home where he would have a yard to run in and someone to be his buddy.  I told him that was what I was looking for, a buddy.  Max really lived up to his end of the bargain. He was my daily walking companion until this last year when he was just too old to handle it.  But, he still took a trip with us out to Seattle to see my daughter and her family.  He loved to travel! 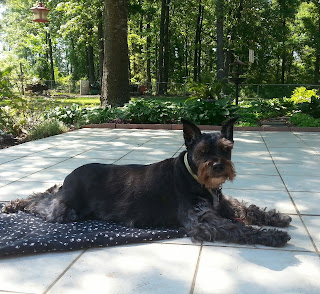 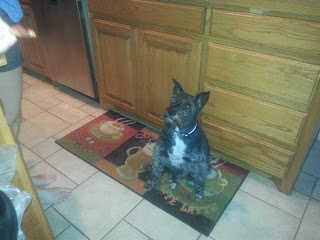 In the spring of 2014 Max became very ill and it took a specialist to find that he had a Peritoneopericardial diaphragmatic hernia.  It was a congenital condition that came to the point he could hardly breathe. So Dr. Hunter had to perform major surgery.  He pulled thru like a champ and we are thankful for the extra four years we had with him. 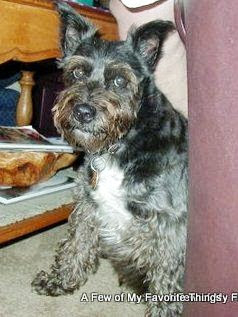 But this week Tom and I realized to ask him to keep trying was just becoming too difficult and the decision was made.  Wednesday morning the 7th of November we both looked at each other and knew.  Such a hard realization but, I know he will always in our hearts!

Posted by Carla A Few Of My Favorite Things 6 comments:

Well with the cold blast we are getting I am so happy to have my Texas Star quilt in my hoop.  I find my favorite time to hand quilt is when I first get up in the morning.  It's a wonderful way to slowly start my day. Maybe I will sit behind the hoop this evening too, it would be nice to have my quilting to distract me from the Cowboys game.  Such a hard year to be a fan! 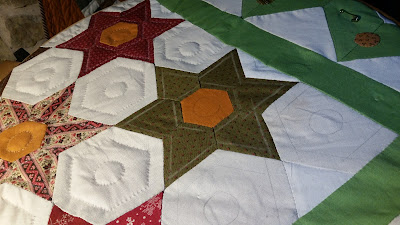 Posted by Carla A Few Of My Favorite Things 14 comments: